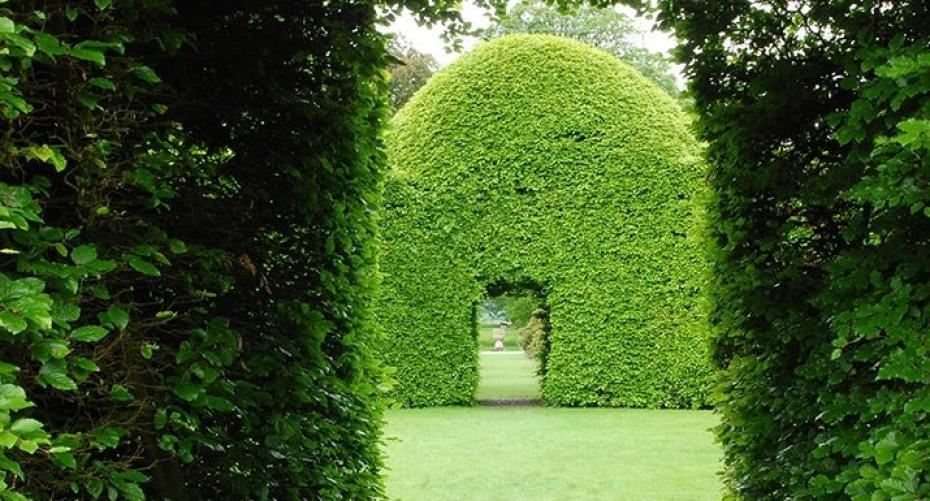 Hedges add structure to the garden and can perform different functions

There are lots of different plants suitable for hedges, it just depends what sort of hedge you want and what function you want it to perform. Do you want to prevent intruders entering your garden; edge a path, driveway or vegetable plot; protect the garden from strong winds; break the garden into separate areas or create a focal point? Do you want an evergreen hedge; a seasonal hedge; low or tall; formal or informal? The possibilities are endless. They can absorb noise if you live in an area of heavy traffic and provide shelter for the rest of the garden. A hedge can reduce the amount of wind by up to 75%, just make sure that it is not solid as it needs to diffuse the wind not stop it completely; as this could lead to the hedge being uprooted in a storm.

Hedges take up quite a large space as you need to leave a path in front of it wide enough to take a wheelbarrow and maybe scaffold. If space is an issue you may be better putting up trellis and growing climbers. Good slender growing varieties are: Thuja occidentalis (Canadian Thuja) ‘Smaragd’ and Juniperus communis (Irish Juniper) ‘Hibernica’. Just trim the tops.

When planting the hedge either plant through a weed suppressant membrane or mulch with 10cm (4”) of chipped bark, cocoa shell or well-rotted compost, as it is essential that there is no competition from weeds.  Water well after planting and before putting down the mulch. Make sure it is well watered for at least 18 months after planting until its roots become established. Put blood, fish and bone fertiliser in the trench before planting and this will help produce a good root system.

As a general rule if a hedging plant is fast growing it doesn’t stop until it reaches a considerable height so make sure this type of hedge is not neglected. If you want a hedge of 180cm (6’) hedge let it grow to 240cm (8’) then cut 60cm (2’) of the top; this will ensure that the top is stays thick. This applies to the Cupressocyparis leylandii (Leylandii)  and Chamaecyparis (False Cypress). Remember to knock any snow off the hedge as this will cause it to splay out and if left for any length of time the damage will be permanent.

Pleached hedge leading to a water feature at Levens Hall

These usually consist of plants which have vicious thorns. Some plants are evergreen and some are deciduous. An extra level of security can be obtained by erecting a post and wire fence first, then planting against the fence. After a few years you won’t be able to see the fence. Recommended plants:
Berberis (Barberry)  Evergreen or deciduous, depending upon the variety, and spiny. The foliage colour varies from lime green to darkest burgundy, depending upon variety. Prune back any unruly growth to maintain dense grpwth.
Crataegus (Hawthorn)  Deciduous and spiny, they also produce sweetly scented flowers in spring and berries in autumn, which are loved by birds. Good for a wildlife hedge. Will need pruning to keep in shape.
Prunus spinosa (Blackthorn, Sloe)  Deciduous and spiny, producing white flowers in spring and blue/black berries in autumn which are used for making Sloe Gin. Also makes a good wildlife hedge. Prune to maintain dense growth.
Pyracantha (Firethorn)  Evergreen and spiny, they produce small flowers in spring followed by fruits in autumn, which are loved by the birds. Fairly slow growing so will not need pruning as regularly as some of the other species, just cut off unruly growth to maintain dense growth.

Rosa canina (Dog Rose) Deciduous and spiny with pale pink/white flowers in summer followed by hips in autumn which are loved by wildlife. Good for a wildlife hedge. The cultivated rose ‘Wild Edric’ from David Austin deserves special mention for it’s particularly vicious thorns; it also has a long flowering period producing large, very fragrant carmine blooms. It makes a large shrub, so they do not need to be planted that close together. Prune back in early spring to maintain a dense shrub.

If you want to increase the range of plants you grow in a coastal garden a sheltering hedge is essential as protection from the wind and salt spray. Recommended plants:

This type of hedge varies in height from a small 30cm (12”) hedge which edges paths, beds and parterres to a tall formal hedge. Recommended plants:
Buxus sempervirens (Box) Slow growing, suitable for low hedges around a parterre or vegetable plot. Small leaved so can be cut with shears. Suitable for topiary.
Cupressocyparis leylandii (Leylandii)  Fast growing and needs attention every year. Suffers from bad press owing to it not being kept under control. If regularly maintained it makes a good hedge.  If you want a 180cm (6’) hedge let it grow to 240cm (8’) then cut the top 60cm (2’) off to produce a thick top. If you cut the growing point at 180cm the top will remain straggly. Can be trimmed with a hedge trimmer or shears.
Ilex crenata (Japanese Holly) Very similar to Box and Sarcococca, so treat in the same manner. A good alternative if you have suffered from box blight. It has a few black berries in autumn, which are poisonous so this is not suitable if you have children.
Lavendula (Lavender) A lovely fragrant, silvery green low hedge which flowers in summer. Makes a good edge to a path. ‘Hidcote’ is a good small, compact variety. Unfortunately does not have a long life, only about 10 years. Cut it back after flowering by about a third to stop it becoming straggly and woody.
Ligustrum ovalifolium (Privet)  Fairly fast growing, must be trimmed every year; can be done with a hedge trimmer or shears. Suitable for cloud pruning. Available with dark green or green/gold leaves.
Lonicera nitida  Small leaved and ideal for a low hedge. Baggesen’s Gold is a good gold leaved variety. Can be trimmed with a hedge trimmer or shears.
Prunus laurocerasus (Common Laurel)  Large leaved and fast growing, needs cutting every year to stop it getting out of hand; must be cut with pruners or secateurs.
Sarcococca  (Christmas Box, Sweet Box) Fairly slow growing with small white, sweet smelling flowers around Christmas. Similar in habit to Box, so treat in the same manner. A good alternative to box if you have been affected by box blight.
Taxus baccata (Yew)  Classic hedging, fairly slow growing. Can be trimmed with a hedge trimmer or shears. Suitable for a low or tall hedge, cloud pruning and topiary. Can be brightened up by growing Tropaeolum speciosum (Flame Creeper) through the branches.

Recommended plants:
Cotoneaster They can be evergreen or deciduous with small leaves, flowering in spring and producing yellow, red or orange berries in autumn, which are loved by the birds. Many also have good leaf colour in autumn. Prune with secateurs to maintain shape.
Crataegus (Hawthorn) See security hedging.

Escallonia See coastal hedges.
Forsythia Deciduous plant which produces masse of bright yellow flowers in spring before the foliage. Makes a fairly large loose hedge. Trim to shape with secateurs immediately after flowering.
Osmanthus x burkwoodii Evergreen, with small white fragrant flowers in summer. Trim back after flowering with secateurs.
Rosa (Roses) Deciduous with glossy leaves, often flowering well into autumn. There are lots of varieties to choose from; English shrub roses make a particularly good thick hedge with the majority being fragrant. Prune in spring depending upon the height of hedge required.
Viburnum tinus Evergreen with small fragrant flowers in winter and spring. Makes a good dense hedge which only needs pruning to shape with secateurs after flowering.

If you are undecided about which type of hedge is right for you why not plant a seasonal hedge as a temporary measure for the summer. You can use any tall growing herbaceous plants such as: sunflowers; maize, Jerusalem artichokes, hollyhocks, delphiniums.