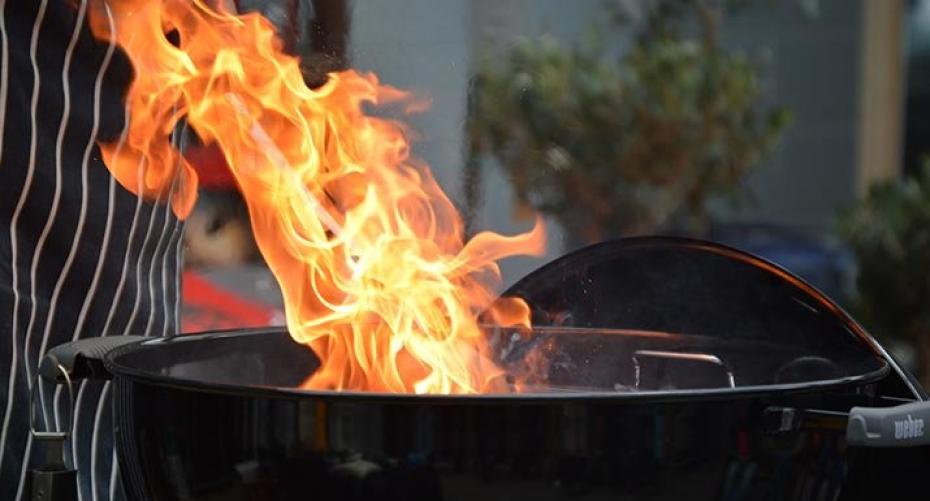 A BBQ is essential for anyone who loves cooking

If you thought barbecues consisted of leathery beef burgers and cremated sausages, think again! Richard Holden was the Weber chef doing the demonstration in store last weekend and treat customers to gourmet food and lots of great tips for barbecues. He completely changed my attitude to barbecuing; I’ve always associated it with burned food and ending up smelling like a kipper! We were treat to chicken breasts marinated in thyme and lemon, slow smoked pork shoulder, pork loin stuffed with herbs and lemon (with the most amazing crackling) and roasted parsnips and sweet potato. He also cooked the most luscious risotto, in a wok set into the middle of the grill, and a chocolate and orange cake, which was one of Mary Berry’s recipes.

The Portable Chimney Starter was used to get the charcoal glowing in record time, before it was put into the BBQ; it only took 15 minutes to get the coals ready for cooking. When the coals turn ash-grey then you know that they are ready to cook. Just put in the charcoal, Richard used Lumpwood Charcoal, over the Lighter Cubes, which are non-toxic and odourless. This COC certified Weber charcoal is made from oak and hornbeam from responsibly managed forests. I usually wait so long for the coals to heat that I give up and send out for a pizza!

One of the tips was to always keep the lid on the BBQ and control the heat using the vents in the lid; too far open and the charcoal burns fiercely and too far closed and the charcoal goes out. The chicken was left on the grill until it came away easily, if you keep it moving it will stick, so the message here is don’t mess with the food. Once the outside has caramelised, move the chicken to a cooler spot and let it cook through. This is where the Instant Read Thermometer comes in handy, when the inside of the chicken has reached 75°C it is cooked, so no more dry tough chicken or a dose of salmonella. Don’t rely on the colour of the food to tell you when it is cooked as this can be deceptive. Tongs were an absolute essential for this operation.

Oiling the grill with half an onion

A fantastic tip for oiling the grill was to use half an onion; this kills two birds with one stone, oiling the grill and imparting flavour. Just take half an onion, spear it with a long-handled fork, dip it into some oil and rub it across the grill. No more charred fingers using kitchen paper. Talking about charred fingers, Premium BBQ Gloves are a must; they are more flexible than an oven mitt and have silicone grips so that nothing escapes.

A shoulder of pork was put into the Smokey Mountain Cooker, which is ideal for cheaper, tougher cuts of meat; it takes about an hour per lb to cook. If there is an offer on salmon at the supermarket, the Smokey Mountain is ideal for preserving. There are a variety of flavoured wood chips, such as apple, cherry and hickory, available to give you differing degrees of smokiness.

Pork loin on the rotisserie

Pork loin was stuffed with herbs and lemon then put onto the rotisserie to cook evenly. These are available for most styles of Weber BBQ, both gas and charcoal. Again the meat was probed to ensure it had reached 75°C; once meat reaches this temperature it is cooked. If you are going to have pulled meat then it needs to reach 95°C, as the sinew which holds the fibres together dissolve at 94°C, which enables the meat to fall apart easily. You can still cook a joint even if you don’t have the rotisserie, just keep turning the meat.

Not being a fan of risotto I was completely won over by the taste of Richard’s chilli and squash version; may have had something to do with the lashings of gooseberry wine and the butter, mascarpone and parmesan cheese he put it at the last minute! It was cooked in a wok in the centre of the Gourmet Barbecue System (GBS), which is basically a grill with a removable centrepiece into which you can fit different accessories. It fits a 57cm charcoal BBQ and the Spirit Original, Genesis and Summit gas models. The Wok Tool Set were invaluable for turning the risotto; as they are made from beech they won’t scratch the surface of the wok and they have hooks on the end of the handles which are handy for hanging on the side of the BBQ.

Diced sweet potato and parsnips were coated in oil then placed in the stainless steel Vegetable Basket to roast.

The Mary Berry Chocolate and Orange cake was baked in a greased and lined foil tray on top of another up-turned foil tray; this was so that the base of the tray didn’t touch the grill, otherwise it would have left caramelising marks on the base of the cake. It also ensures a good airflow around the cake.

Keep an eye on our events page for news of the next demo.