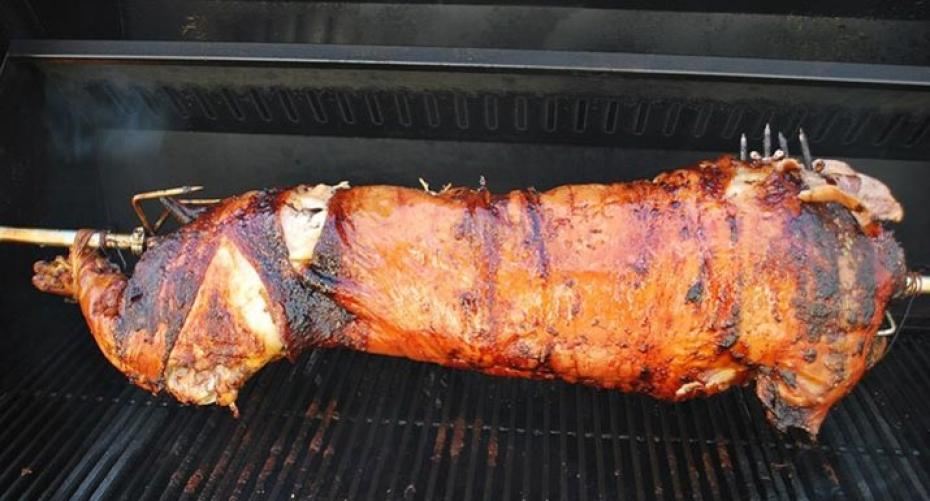 Barbecuing Around The World

Enjoy a trip around the world with internationally inspired barbecue food

Ever since man started cooking with fire around 350,000 years ago we have been tapping into this primal urge by cooking on the barbecue as soon as the weather allows. Of course many cultures still use fire to cook their food as a basic necessity, whereas cooking over the barbecue for most of us is a pleasurable experience to share with family and friends in the garden on a lovely sunny evening. Most people think of barbecues and associate it with eating huge quantities of charred meat, but times have changed. Watch the videos we have done in collaboration with the Gourmet Barbecue chef Richard Holden to see just what can be achieved on a barbecue. Nowadays the BBQ can incorporate a wok, Dutch oven, waffle iron or griddle to elevate your cooking to a different level; almost anything which can be cooked in the kitchen can be cooked on the barbecue.

The major barbecuing nations are Argentina, Australia, South Africa and the USA who really do take their grilling seriously; not for them the odd burger on a sunny Saturday evening. They have been known to cook a whole adult cow suspended on a massive frame over a whopping big fire! Another whole animal which is a hugely popular barbecue food is the 'lechon'; a whole small pig which is cooked slowly over charcoal. This is mainly confined to the Spanish speaking areas of the world and the Phillipines, where it is stuffed with a mouth-watering mixture of leeks, lemongrass, garlic, salt and pepper.

For barbecue purists the fuel has to be wood or charcoal to impart that traditional smokey, woody flavour but gas barbecues have seen a surge in sales in recent years. Gas has many advantages over charcoal, the main ones being that it is quick to come to cooking temperature and it is clean. The main disadvantage is the lack of smokiness in the food, but this is being addressed by the use of Flavorizer bars on the Weber barbecues, which when hit by the hot fat give off smoke which gives your food that characteristic BBQ flavour.

Many cultures have fantastic cheap, tasty street food cooked over open flames. Chinese ‘chuanr’ street food has been served for generations and originally consisted of skewered pieces of lamb flavoured with cumin, dried peppers and sesame oil. Nowadays it has expanded to embrace most meats, fish and even insects. In adjoining Hong Kong ‘char sui’ is the traditional street food consisting of strips of boneless pork skewered and marinated in five spice, hoisin and soy sauce and some red food colouring to give it the red outside we know so well from our Chinese restaurants.

Skewering food appears to be a worldwide favourite way of cooking over the fire. In Greece they serve up ‘souvlaki’ which is meat, fish or vegetables marinated in garlic, olive oil and lemon juice. It is usually served in pita bread with salad and a yogurt based sauce called ‘tzatziki’. Kebabs of meat, fish and vegetables are a traditional favourite of the eastern Mediterranean regions and the Middle East. ‘Satay’ is the traditional way of cooking meat on skewers in Malaysia, Thailand, Indonesia and Singapore. Marinades vary from region to region, with coconut and fish sauce being a favourite in Thailand. They are usually served with the satay sauce which is made from peanuts, garlic, chilli, ginger, sugar and salt.

The South African ‘braai’ is usually half an oil drum with sturdy wire mesh across the top, always using wood for fuel; not for them the all-singing all-dancing barbecues which we know, and more resemble an outdoor kitchen. A favourite South African barbecue dish, apart from the ever-present steak is ‘boerewors’, a sausage made purely from minced meat and spices. All this meat is usually washed down with large amounts of alcohol!

An important part of the BBQ for many nationalities is the use of a marinade to impart flavour. A favourite of Jamaica is ‘jerk’, which is meat rubbed with either a wet or dry hot spicy mixture, with the emphasis on hot! They traditionally use chicken or pork but you can adapt it to flavour any other meat or fish. ‘Bulgogi’ from South Korea is strips of beef which is marinated in a variety of flavourings included garlic, pepper, ginger, onion, soy sauce, sugar and sesame oil. This results in tender, sweet salty beef which is usually served with grilled peppers and wrapped in a lettuce or other large vegetable leaf. In Russia ‘shashlik’ is lamb marinated in lemon juice or vinegar before grilling; although it can be pork, chicken or beef. ‘Tandoori’ chicken, a favourite in India, Bangladesh and Pakistan is marinated in a yogurt and spice mixture, often incorporating garam masala, ginger, cayenne pepper, onion and garlic. The skewered chicken however is not cooked straight over the coals but in a ‘tandoor’ which is a clay oven placed into the hot fuel.

‘Carne asada’ is a speciality of Mexico which consists of thin slices of grilled beef served with grilled onions, salsa, beans, guacamole and rice in tacos or burritos. ‘Asado’ is the traditional art of barbecuing salted beef in several South America countries including Paraguay, Uruguay and Argentina. This is usually served with salad and red wine. In Brazil it is known as ‘churrasco’ but also includes pork, chicken and sausages.

Next time you have a barbecue you can easily cook your way around the world as most of the recipes just require a bit of advance preparation. Once you have done the marinade most of the food is just grilled using basic techniques. Food must be marinated for at least an hour and preferably overnight to make sure the flavours permeate through the meat. Most of the marinade ingredients are all readily available and most of us already have a lot of them in the store cupboard, so you can easily elevate your barbecuing to an international level.

Combine all the ingredients; it will keep for at least a month.
Serve the steak with deep fried onions; thinly slice large brown onions, dip in beaten egg and seasoned flour then deep fry in hot oil.

If you have any BBQ problems you want solved just call our expert team in The Barbecue Shop here in store.