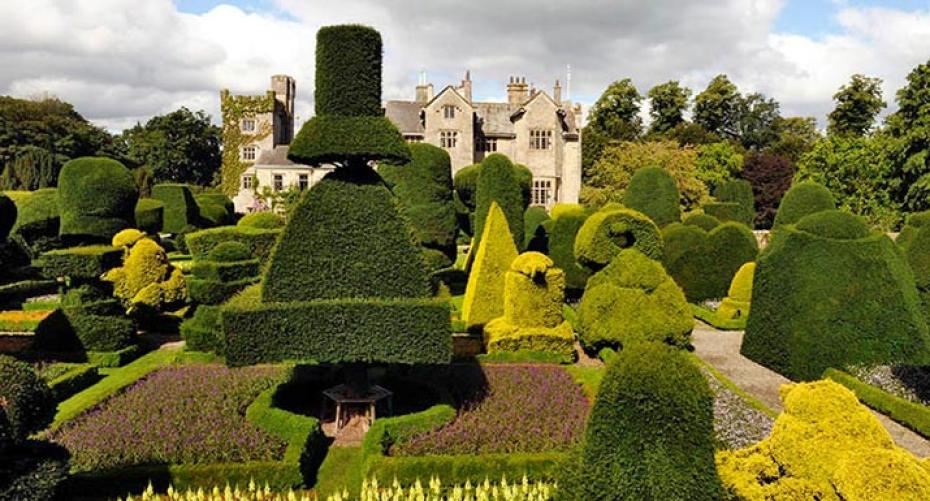 The Art Of Topiary

The art of topiary involves training and pruning plants into geometric and even quite fanciful shapes & has been practised since Roman times. Indeed the term topiary comes from the Latin topiarius, meaning the person tending a garden. The more specific definition, ars topiarius, depicting skill in shaping living plants, soon followed.

In Renaissance Italy the art became popular again, and the artistic genius of the age that produced Michelangelo and Da Vinci, found its horticultural outlet. Temples, porticoes, vases, urns, men, women, popes, cardinals, warriors, vases, urns, donkeys, apes, giants, a bear and a harpy were just some of the topiary designs of the time.

Topiary extended into France and Holland & became extremely popular in England in the 17th century. As the English landscape movement became popular in the 18th century, formal gardens were dismantled & replanted with more naturalistic planting & sinuous curves. The poet Alexander Pope derided the art of topiary in 1713 with a tract in a periodical of the time which praised simplicity in nature against “monstrous attempts beyond the reach of the art itself”.Topiary regained its popularity in the 19th century and has been practiced ever since.

If you fancy having a go yourself, the best plants to work on are the evergreen box, yew and, to a lesser extent, holly, privet and bay. This is because the two former shrubs are slow growing, dense in habit and suitable for regular cutting whilst the latter ones do not grow as close and are less neat.

Before you plan your design or decide which shape you are going to buy it is important to decide where it will be placed as this can enhance or detract from the overall look of the garden. It is also advisable to ensure that the plant gets a good all round supply of sunshine, the shelter of overhanging trees or shade on one side will make the shrub naturally lean towards the light.

A large topiary piece can provide a great focal point so should be positioned accordingly, at the end of a viewpoint or as a pair either side of an entrance. Otherwise they fit in well as focal points amongst more natural borders, in conifer gardens or as part of a hedge.

Opting to create designs that are wider at the base than the apex avoids the problem of overshadowing. That occurs when the base of a topiary or hedge is cut deeper than the top to create an overhang. Year after year the top then shades out the bottom till there are no leaves growing.

Buy or grow a plant which is roughly as near the shape that you want to produce; for a cone you would want an upright bush. Give the plant a good start with plenty of fertilizer and don't clip until it is fit to snip, meaning when it is growing good and strong. If you are a beginner it is advisable to start with simple shapes then, as your confidence grows, progress to more complicated ones. Simple shapes may be clipped free hand; use long handles shears to cut the rough design followed by hand or topiary shears for neatening off.

To create a cone you want to locate the leader stem at the top & using that as the centre of the cone, work away & down from this taking time to stand back & make sure you are cutting evenly on all sides to make a balanced shape. For more complex designs it is best to use a frame which can act as a clipping guide, you can construct your own using chicken wire & canes or buy a ready-made frame. Fit this over the plant & trim to shape. Any holes or gaps will gradually fill in with time over succeeding years.

Yew, being slow growing, generally needs cutting only once a year. Box, twice a year and privet three times a year. If you desire really neat shapes extra work will be needed. Be sure that you don't cut back too far because if you cut into the brown wood, without any resting buds, you run the risk of killing off that part of the plant. With yew it is recommended that you cut back to 3mm or one eighth of an inch of the year’s new growth. Diseased or dead wood will, of course, need to be pruned out at regular intervals.

If you follow these basic guidelines you have the chance to create a masterpiece, practise makes perfect, we can all slip up, but then plants do grow again. Who knows you might discover a hidden artistic flair. Best of luck!

We are most fortunate in Cumbria to have the world famous Topiary Gardens at historic Levens Hall. Situated a few miles south of Kendal, both hall and gardens are open to the public and are well worth a visit www.levenshall.co.uk.

The garden, originally laid out in the 1690’s when topiary was widely popular, managed to escape being destroyed during the landscape movement when formal gardens fell out of favour. Today it is the oldest, the finest and the most extensive topiary garden in the world. Indeed it has changed little since the 1690’s, apart from some 19th century enhancements.

If you visit Levens Hall you will find over a hundred individual pieces, all kept neatly trimmed by the gardeners. There are geometrical shapes and other individual designs such as a judge’s wig, Elizabeth the first and her maids of honour, King and Queen chess pieces, the Howard Lion, the great umbrellas, four peacocks and a jug of Moroccan ale. Thanks go to Levens Hall & Gardens, Cumbria for providing some of the images.

For the budding topiary artist it is a great place to find inspiration.