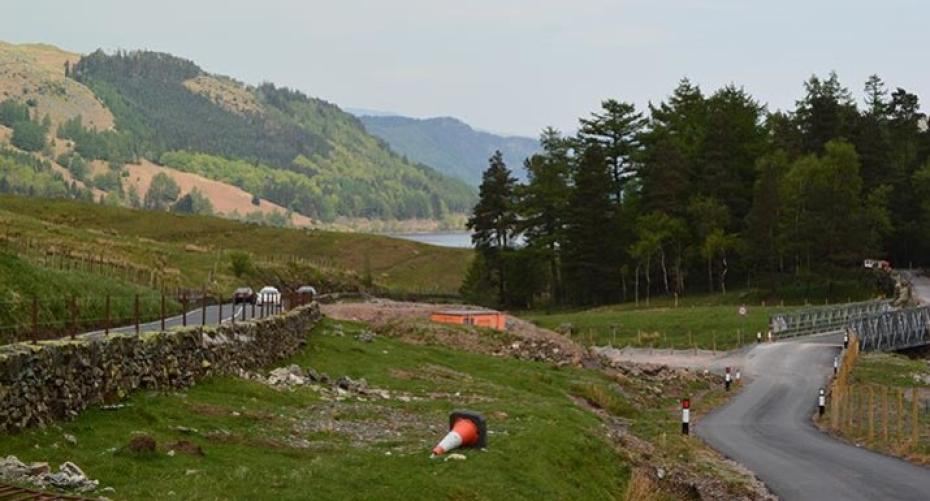 Today, Wednesday 11th May, is a great day to celebrate here in the Lake District. Finally the A591 which runs through the entire Lake District has re-opened, re-uniting the North and South Lakes for the first time since storm Desmond washed away huge swathes of the Lakes. A huge portion of the A591 was completely washed away at Dunmail Raise resulting in an extra 30 + miles for anyone having to commute from north to south and vice versa. Drivers had either to travel the M6 via Penrith or go over Kirkstone Pass and up through Matterdale onto the A66. The Kirkstone route was the shortest option but unfortunately was subject to several closures over the winter due to snow.

Eventually a temporary bridge was constructed by-passing the washed-away section and the forest road improved to allow for a shuttle bus service to operate hourly between Grasmere and Keswick. Although this was a temporary respite and well used by people wanting to show support for the beleaguered businesses it was too little too late to prevent several smaller enterprises from closure. South Lakes MP Tim Farron has estimated that the local economy has lost £1million per day; as most of our businesses are small family run concerns this kind of loss is not endurable.

The repairs involved supporting 4.5m wide concrete panels between steel posts, which will hopefully prevent this sort of catastrophe from happening in the future; although this type of extreme weather could become the norm as a result of the changes in the global climate. The repairs were finished 3 weeks ahead of the earlier re-opening date of the end of May.

Hopefully with the re-opening of the road today we Cumbrians are one step further to getting back to normal; we may be down for a while but we are never out. So please come and support our local businesses in this special place where you can be assured of a warm welcome, spectacular scenery and world beating food and drink.