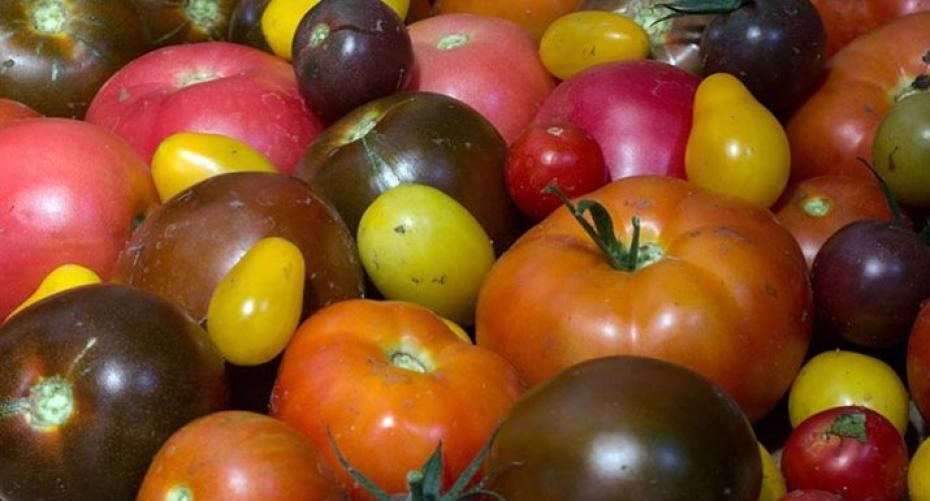 The Year of the Tomato was the brainchild of Fleuroselect, an organisation which assesses new varieties of seed for their suitability to be grown in the European climate. If you have never tasted home grown tomatoes you have missed a gastronomic treat, they are massively more flavoursome than those you buy in the supermarket. Commercial tomatoes are specifically bred to ripen all at the same time, at the expense of sweetness and flavour. In 2012 these commercial tomatoes commandeered about 4.8 million hectares of land and were the 8th largest worldwide agricultural crop.

They are a perennial climbing plant, Solanum lycopersicum, which originates from Central and South America where they grow entwined through other plants for support. It is thought that they were first cultivated in Mexico and brought back to Europe by the Spanish in the 1540s and arrived in the UK around the 1590s. Unfortunately the colder climate in Europe meant that they could only be grown as annuals, most of which now need protection in the form of a greenhouse or poly-tunnel. The exceptions are the bush types, trailing and some grafted tomatoes which are generally classed as ‘determinate’. ‘Indeterminate’ tomatoes are the tall cordon varieties, some also available as grafted plants, which need support and are usually only grown under cover. The tall growing varieties are generally only allowed to reach a height of 180 – 210cm (6 – 7’), and will ripen in succession starting from the bottom to the top of the plant. The determinate varieties generally only give a small crop with all the fruits ripening at the same time. Any fruit which hasn’t ripened by September can either be made into chutney or placed on a warm sunny windowsill to ripen.

They are classed as a fruit but due to their savoury taste are more commonly thought of as a vegetable. They are part of the Deadly Nightshade family and as such the leaves are toxic, so make sure you don’t feed the stems and leaves to livestock. They not only come in red but also yellow, orange, purple, pink, ivory, striped and fuzzy. There are different types of fruit ranging in size from the huge beefsteaks through the plums to the tiny sweet cherries. Modern hybrids, of which there are now thousands, are bred to give a larger crop and be more disease resistant, making it easier for the novice grower to achieve a reasonably large crop. The seed off these hybrids cannot be saved to use the following year as it does not come true to the fruit which you save it off, but reverts back to its parentage, of which there can be several different varieties in the mix. Heirloom varieties which have been grown without crossing with any other variety for a couple of hundred years will give you viable seed to use the following year; they just don’t usually yield as heavy a crop as the hybrids but normally do have a far superior taste. Grow basil as a companion plant and it reputedly enhances the flavour, also feeding the plants with a weak sugar solution when the fruits have formed will boost the sweetness.

Tomatoes are self-pollinating, but some growers have a problem with the flowers not setting fruit, so make sure you always have the vents and greenhouse door open during the daytime when they are flowering. This enables pollinating insects, such as bees, to gain access. Giving the plants a gentle shake when you tie them to the canes also helps. They are relatively easy to care for; they need planting in a sunny spot where they will receive at least 7 hours of sunshine each day, and regular watering, as giving them a lot then letting them dry out causes no end of problems.

They are such a versatile fruit being eaten raw in salads and sandwiches, cooked and used for sauces. Different varieties being used for specific dishes; San Marzano for sauces, cherry types for salads, beefsteak being the ideal size for burgers. Try roasting the larger plums with aubergines, courgettes, peppers, red onions, garlic and chilli in olive oil for a versatile  base for lasagne or just as a vegetable accompaniment to cooked meats or just with fresh crusty bread. Roasted mid-sized tomatoes make a lovely addition to a Sunday roast; just place in an oven-proof shallow dish, cut a cross in the top, brush with olive oil and sprinkle with chopped garlic, a selection of fresh Mediterranean herbs, black pepper and sea-salt. Bake in a moderate oven for about 25 minutes.

They are hugely beneficial to your health being packed with anti-oxidants, vitamins and trace elements. They can help fight osteoporosis, lower cholesterol, prevent blood clots, regulate blood sugar and keep your skin young-looking. There are also on-going studies into their effectiveness at fighting prostate cancer in men. There is also some evidence that they can reduce neurological diseases, which could help slow or prevent Alzheimer’s disease. They slow vision loss by reducing macular degeneration and the bioflavonoids and carotenoids are a natural anti-inflammatory which can help relieve joint pain.

All in all they really are worth a spot in your garden or in a hanging basket outside your back door. If you are growing them out of doors try the grafted varieties or the small bush types such as; Red and Yellow Balconi or the tumbling varieties suitable for a large hanging basket; Maskotka or Tumbling Tom Yellow. If you don’t have a greenhouse but want to grow the large varieties there are small plastic structures available which are made specifically to take a single grow bag. So in this year of the tomato give them a go and I’m sure once you taste your own home-grown crop you’ll be hooked.

If you need help or advice on growing vegetables just contact the Outdoor Plant team here in store.